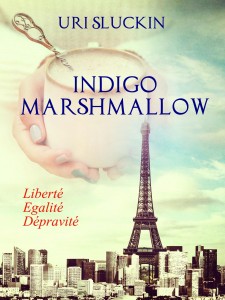 Meet people you might know, doing things you wouldn’t believe!

The pious insanities of French corporate deities. As the Fifth Republic crumbles and the disoriented population, faced once again with repeatedly rejected political choices is getting ready to embrace a populist future, the party goes on. Or at least it did for the five corporate princes, until the long forgotten skeletons decided to come out and scare them to oblivion.

Indigo Marshmallow, the brand new corporate thriller that will make you cry with laughter and gasp in amazement at its audacity is available on Smashwords and through all usual ebook websites: Amazon Kindle, Barnes and Noble, KOBO...

Stéphane de Castille, the chairman and owner of Indigo, France’s top online retail company, summons four of its top directors to a celebratory boardroom meeting. They never make it. Imprisoned and kept in separate cells without any notion of time, they’re mentally tortured and physically tormented until they write detailed confessions about the events leading to the present day. Beneath the thin veneer of their seemingly conventional lives, each one of them has a sombre, hidden past.

Their secret journeys are intertwined and marked by a multitude of skeletons. Their individual tales unravel the sordid underworld world of sexual deviances, international Dark Web based fentanyl smuggling, paedophile activities within the French Catholic Church, betrayal and murder.

They all portray the duality of human nature and the current, pitiful state of crisis-ridden France.

Impertinent, sanguine humour often takes the reader into the uncharted waters of non-PC.

The perverse reality and moral corruption of power hungry corporate elites of the crepuscular 5th Republic ahead of May 2017 presidential elections are real. The story is based in present day France but the plot and its main characters take you to Thailand, Cambodia and London during the late ‘70s.

Frequent societal, cultural and political references provide a fertile background for the criminal adventures of the six principal protagonists and heighten the inherent feeling of deliciously twisted déjà vu. Flashes of today permeate the story, urging the reader to go to the very last page.